The Designer is an entity-relationship model (ERM) viewer and editor, aimed at designing physical databases (only databases, and only physical). It is currently under development and will probably be the first component you can actually download from here and use.

The designer will be a desktop and web (on premises) application, that is aimed at both graphically designing your data and support all the common database activities one does during development, like creating test data, editing domain data, visualizing the database state, or verifying SQL code.

It is also aimed at database synchronization and also script creation and management through a deployment pipeline.

The designer UX is based on a git development model, so its data is stored on legible text files (in a language that is being developed, to be announced), structured in a way that minimizes diffs. It will also support graphical diffs and diff3 merging, so that the Designer supports the entire life cycle of a git project.

Features for design reuse, automation and verification are also on the planning. But those will come later on the development, so their exact format is still subject to changes.

What it is right now?

Anyway, that is what is planned. Currently the Designer is a very basic web-based modeler, with the minimum functionality still unfinished. 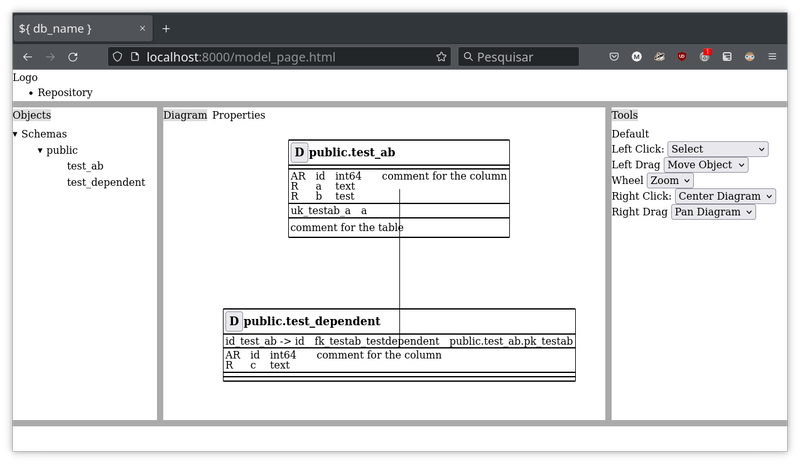 There is ongoing work both on the front and back ends. I plan to make a first release as soon as the ERM editor is complete, so you can try it.

At first it will only have the web front end, that should run on a local computer to edit on-disk diagram files. It will still not support any of the features from the plan up there, not even the high priority ones for interacting with databases and git. Those should come shortly after.

And, well, that's it. Back to programming now. I hope to post more news here soon.